In our coverage of the bonus scandal from the Montgomery County Prosecutor’s Office, we first looked at how Mat Heck has provided bonuses averaging $8,851.35 to employees in 2020. Then we looked at Heck’s history of graft and previous reports that called him out for misusing public funds. Today we look at the powers prosecutors hold and how Heck’s use of extravagant bonuses amounts to an illegal abuse of that power by tipping the scales against the public defender’s office.

The Awesome Power of a Prosecutor

Our previous article reported that county officials universally fear Mat Heck. There are multiple reasons for this. First, Mat Heck is well entrenched in the local Democratic party, which we will look at in more detail in a future article. More pertinent to this article is that prosecutors in general have vast and largely unchecked power. As you may recall from our previous article, a county official explained this power by saying, “he’s our attorney.”

In a 2016 article for Reason, attorney Ken White details three cultures that leads prosecutors to disregard the rights of defendants and engage in misconduct: “the culture of the prosecutor’s office, American popular culture, and the culture created by the modern legal norms of criminal justice.” We view prosecutors, like other branches of law enforcement, as the good guys. White points out that these cultures result in uncritical approbation for prosecutors, meaning that “prosecutors are trained to treat defendants’ wrongdoing harshly and government wrongdoing leniently.”

Treating government wrongdoing leniently is especially worrisome when no one exists to hold prosecutors accountable. Nixon infamously stated that, “when the president does it…that means that it is not illegal.” Prosecutors have a similar attitude. When no one watches the watchmen, no law restrains them. 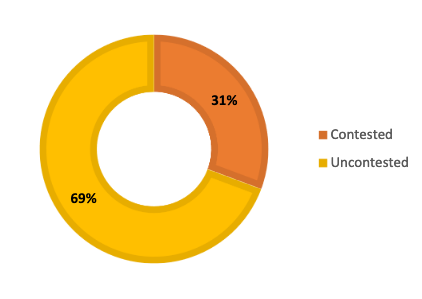 Technically, voters are the ones who hold prosecutors accountable. Unfortunately, elections have done little to hold prosecutors accountable in any form. Mat Heck has only faced an election challenge once, in 1992. In 1996 the Democratic and Republican parties of Montgomery County arrived at a public agreement to allow Heck and then-sheriff Haines to run unopposed (see article below). According to a study by Ronald F. Wright, “elections do not promote much turnover in office among chief prosecutors, nor do they prompt much public scrutiny for the policies and priorities that chief prosecutors choose.” In 2016, 69% of Ohio prosecutors ran unopposed. Of the twenty-seven offices presented with electoral challengers, only nine challengers won.


A Violation of the Law

Usually prosecutorial power and abuse is identified in the relationships between prosecutors and defendants. It is difficult if not impossible to hold prosecutors accountable for misconduct related to specific trials because they enjoy “absolute immunity” from civil suits related to prosecutorial misconduct. Our investigation underscores how the power of the prosecutor’s office extends further and can be abused for personal or political gain. Unfortunately, as outlined in our previous reports, the prosecutor has broad discretion over how to use his funds. If he wastes taxpayer money, the most immediate remedy is supposed to be a removal by voters.

We believe that Heck uses these bonuses for political means—something he has been charged with in the past—and therefore violates existing statute. In our next article we will dig into that a bit more. But today we want to look at how Heck’s bonuses violate the law in a way that is more easy to demonstrate and relates more specifically to broad, unchecked prosecutorial misconduct. Ohio Administrative Code 120-1-06 states:

The supporting staff, facilities, equipment, supplies, and other requirements needed to maintain and operate an office of a county or joint county public defender shall be sufficient to allow quality representation and shall be substantially equivalent to that provided for the county prosecutor’s office. In applying this rule, the following criteria shall govern:

(A) The salaries for public defender attorneys shall approximate and be in parity with the compensation received by prosecutors with comparable years in practice and experience.

Do the public defenders receive such large bonuses? No. According to our public record request, public defenders all received a $916.00 bonus for the pandemic. The smallest bonus Mat Heck handed out was $4,679 and that was to an “office messenger.”


ORC 120-1-6 (A) is there to make sure that public defenders are not working at such a severe disadvantage versus prosecutors that defendants would not receive a fair trial. According to the Sixth Amendment to the United State Constitution, defendants in criminal cases are entitled to counsel. In the 1963 case Gideon v. Wainwright, the right to a public defender for those unable to afford legal representation was affirmed by the Supreme Court and subsequent cases have further extended this right. Public defenders often lack the resources and pay of prosecutors, and they are often comparably overworked, but the Ohio code attempts to mitigate this by ensuring parity between prosecutors and defenders when it comes to pay and resources.

By using bonuses to circumvent the salary levels set by the county commission, Mat Heck has violated this law. His bonuses ensure that the prosecutor’s office will be able to attract better talent than the public defender’s office and deny “quality representation” that is “substantially equivalent to that provided for by the county prosecutor’s office.” Having handed out these bonuses for decades, Heck has been in violation of this parity equation for decades.

A more pedantic look at the law would highlight two key words: “salaries” and “compensation.” Heck may argue that a parity of salaries remains and that bonuses therefore do not violate the statute. This argument is weak for two reasons:

If you look at the Public Defender letter above, an interesting detail states that employees will not receive Christmas bonuses because of pending retirement payouts. This indicates that not only is Heck doing an end-around the parity measures, but that the county is not providing the public defender’s office with the appropriate funds to match Heck’s spending. Ohio Code specifically calls for a parity of resources and compensation, yet the Prosecutor’s Office somehow ends up with a surplus of over a million dollars while the Public Defender’s Office must make cuts to meet retirement obligations.

Unfortunately, indigent defendants who have been prosecuted by this imbalanced system probably have few options. Because of the absolute immunity prosecutors enjoy for misconduct, they cannot be sued even if they broke the law. It seems unlikely that any sentences would be overturned because Ohio law actually goes a step beyond court precedent, which only requires that a defendant received “effective counsel,” which is a very low bar. It would be difficult for any defendant to argue this had a material impact on their case.

Further complicating matters is that, as a part of the Ohio Administrative Code, it’s not clear whether there are penalties for violating the code. What’s worse is that Heck’s clearest violation of the code—financial maneuvering so that public defender offices cannot adequately adhere to the code—may be a case where no one is in a position to do anything about it. This is the problem with prosecutorial misconduct first outlined in this article—even when prosecutors violate the law, no enforcement mechanism exists to remedy the situation.

Ohio Revised Code does provide a solution with section 309.05 (“Removal of prosecuting attorney for neglect or misconduct”) to deal with corrupt prosecutors but it’s unpalatable by design. It requires a taxpayer to file a complaint “containing distinct charges and specifications of wanton and willful neglect of duty or gross misconduct in office by the prosecuting attorney.” However, this will just take you before a judge who has known the prosecutor for years and is likely friendly with him. The judge may rule that the prosecutor committed misconduct but not “gross” misconduct. If you lose the case “the court shall render judgment against the losing party for costs.” The prosecutor has the unlimited resources of the taxpayers at his disposal to cram the case with filings to delay and raise the costs to the taxpayer. The law itself protects lawbreakers within the government. This is why Reconstructing Dayton believes Ohio needs a non-partisan elected “Chief Ethics Officer” in each county to oversee elections and Sunshine law violations as well as cases of malfeasance like this.

We believe Heck’s use of exorbitant bonuses violates more than just the Ohio Administrative Code, but we are still collecting information to make a larger legal case. Heck’s ability to violate this law with impunity demonstrates the power of a prosecutor and the inadequacy of our legal system to provide the appropriate checks and balances on prosecutors. It will probably take an outraged electorate—and a brave candidate—to unseat Mat Heck.

In the near future, we will look at the political dimensions of this story and legal ramifications associated with the political nature of the prosecutor’s office. Once we finish compiling public records from other county offices, we will also publish an article looking at this data.

If you would like to received e-mails reminding you when a new Reconstructing Dayton article is published, just type your e-mail into the field at the bottom of this page. We won’t sell your e-mail and we won’t fill your inbox up with spam.