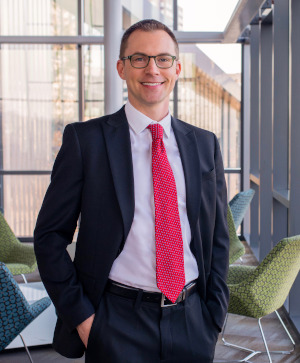 When we sent our candidate survey out a couple of weeks ago, not many candidates cared to respond. Montgomery County Clerk of Courts Candidate Zach Dickerson, on the other hand, was one of our first respondents and we found his answers refreshing. Zach also agreed to sit down for an interview, and we couldn’t have been more impressed with his answers. It was great to see a candidate for Clerk respond positively to the suggestion that the county’s municipal courts should merge. We were also greatly impressed by his commitment to government efficiency, transparency, and security. Zach is receptive to novel ideas and he genuinely cares about the responsibilities of holding public office. Therefore, we will be endorsing Zach Dickerson for Montgomery County’s Clerk of Courts for the 2020 election. Many of his ideas closely align with our goals at Reconstructing Dayton, and his interest in novel solutions makes him a promising candidate.

As a lawyer having spent the last fourteen years working with legal technology at LexisNexis, Zach is highly qualified for this position. We don’t always think that lawyers make the best political candidates, but when it comes to the Clerk’s office, a familiarity with the law is a must. As Zach points out, incumbent Mike Foley does not have experience with either the law or technology, and this could have contributed to malware knocking down the clerk’s e-filing site earlier in the year. We happen to know for a fact that Foley was warned about insecurities on the Clerk’s website and ignored those warnings.

What really made Zach stand out is that he argued that, even though he is running for the Clerk of Courts, he believes that it would make sense to appoint the Clerk or at least increase the requirements for the job. This argument may be a bit self-serving as, under Zach’s proposed requirements incumbent Mike Foley would not qualify for the job while Zach would. However, Zach added that he would support such a change even if it meant that, as Clerk, he would lose his job. We also think that Zach has a good point: Mike Foley is unqualified for the position and he failed voters.

Check out our interview with Zach below to learn more about his history, qualifications, and specific proposals. We’re still working to optimize our video livestreams, so unfortunately the camera focus on Zach is not optimal throughout the interview. Fortunately, the does not impinge on what Zach actually says.