An Interview with David Brannon

Preface: One of the reasons Reconstructing Dayton exists is the number of “unopposed ballot choices” voters are presented with in Montgomery County. It’s not that people don’t want to run, it’s that the party insiders have made deals. One long standing “deal” in Montgomery County it that Judges can only be challenged in their first re-election (An exception was when Dick Skelton spent $250K to unseat Dem Party Favorite Frances McGee-Cromartie who had a reputation for bad docket management and overturned decisions). The only other time we have a judicial race is when judges “age out” and are forced to retire- at 70. Alice McCollum is aged out, and her pick, an employee, Arvin Miller, will only be able to sit one term before he ages out. That’s why there is a race. 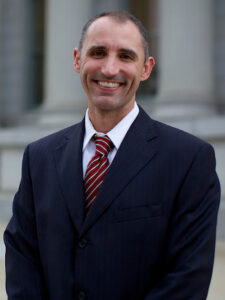 We recently interviewed David Brannon, candidate for Montgomery County Probate Judge. You may have noticed Brannon’s big billboards or his television ads, which his opponent Arvin Miller and others have criticized, accusing Brannon of trying to buy the gavel for nefarious reasons. Brannon contends that, while he is spending quite a bit in pursuit of the position, it’s because he’s young and he would like to hold the job for years to come. And while Miller and others have criticized that much of Brannon’s campaign cash comes from his family and his personal account, Brannon asserts this as another positive—he’s willing to invest so much because he’s passionate about holding the position and he’s not beholden to big donors who may want something. This is probably a case where both sides have good points. Arvin Miller is right to feel disadvantaged because of his opponent’s ability to buy name recognition, but assertions that Brannon is seeking to enrich the family business seem unfounded. The Brannon Law firm does work with probate law, but David functions as the resident expert in probate law. In our interview, he told me that he first became involved in probate law because the other lawyers at his firm disliked it. If Brannon were to win, it seems like the family firm would actually take a hit by losing their ace probate lawyer.

Perhaps what makes David most unique among candidates for judge is that he has some specific policies he would implement if elected. Judges are restricted from discussing how they would rule in particular cases on the campaign trail, so it is not often that one hears a candidate for judge discuss much beyond their credentials. Perhaps the most one will get, from candidates such as Chris Epley, is a promise to “interpret the laws,” which is about as tautological as a potential trashman promising to “collect the trash.” Brannon’s proposals are specific and promising.

First, he wants to partner with nonprofit organizations and the University of Dayton law school to organize a law clinic for the probate court. Our primary concern was whether the judge had the authority to allocate the resources necessary to make such a thing happen. Brannon contended that the only things necessary were space and access. Being intimately familiar with the probate court, he assured me that the former was available and the latter could be provide by the judge. Another potential issue with such a proposal is that it’s hard to build awareness of such projects, especially for those who might stand to benefit the most from them. Brannon conceded that would be a challenge, but said that his partner organizations could help with that, as could the court. We know from speaking with lawyers at ABLE & LAWO, that making key services available is only half the battle. Without awareness, no one can take advantage of these types of services. Still, we like that Brannon is searching for ways to make the probate court work better for Montgomery County citizens. The law clinic would do that.

The next problem Brannon addressed was a need to modernize technology. Again, we wondered how much influence a judge has over this. He conceded that the judge would not directly make those decisions, but he plans on working with Clerk of Courts Mike Foley to address these issues. Mike Foley is probably not the best person to consult when it comes to technology. We have endorsed his opponent, Zach Dickerson, who seems to be much more technologically savvy. For Brannon’s sake, he better hope Dickerson wins if he wants this initiative to be successful.

Brannon’s final big proposal is to support greater communication between police departments and the probate court, so that issues of mental illness can be better handled by the police. He argues that police do not always have the proper resources to deal with mentally ill individuals, and sometimes are not aware that they are dealing with a person with a history of mental illness. By providing police officers with more information, Brannon hopes that the mentally ill will be better identified and taken to treatment facilities rather than the jail. If I understood Brannon correctly, he asserts that because of patient confidentiality rules (HIPAA), police do not have access to a database to inform them whether a person has a history of mental illness. Brannon’s solution is to ensure that the police can contact the probate court 24/7, which would prevent them from temporarily housing mentally ill or incompetent adults in jails. This sounds like a good solution. Whether the county will provide the resources necessary to make this happen is an open question, but having the probate court judge push for it will certainly help.

Brannon did acknowledge the problems with electing judges, especially on a partisan basis. As some Ohioans push to place party affiliation on the ballot, it’s important to realize that judges are already partisan positions. The two candidates that appear on the ballot are each selected through a partisan primary, and then the Democrats and Republicans endorse accordingly. Brannon’s opponent, Arvin Miller, recently sent out a chain e-mail to remind the citizens of Montgomery County that he is an endorsed Democrat. Brannon agreed that ditching the partisan underpinnings of judicial selection would be a good idea, but he did not have any specific ideas for how to do this (our suggestion: ranked-choice voting or, better yet, have the Bar Association recommend judges for appointment). When asked whether the probate court judge should be appointed, Brannon answered that any method of selecting a judge will be imperfect, and that it’s a matter of deciding which compromises to accept. That could be viewed as a non-answer, but it’s also hard to argue with.

Overall, David Brannon appears to be a qualified candidate with some novel ideas. He also liked the idea of a single municipal court for the county, which is an important issue for Reconstructing Dayton. During our discussion he emphasized the importance of his experience as a probate lawyer, and contrasted this to his opponent, who has not practiced probate law despite serving as a probate magistrate for the last twelve years.

We have decided not to endorse any candidates for judicial positions because judges cannot enact policies. However, hopefully this information about David Brannon will be useful for undecided voters. Brannon mentioned how so few people even bother voting for judges because they don’t know what or whom they’re voting for. He filled out our candidate questionnaire and, although as a judicial candidate he was unable to answer many of the questions, he provided quite a bit of commentary at the end. Judging by the signs in people’s yards, it seems that people have aligned themselves with Brannon or Miller for the wrong reason: party. We encourage voters to do a bit more research, as neither political party has a platform—nationally or locally—relevant to probate court.