Maps have been in the news lately. Cartography has not become a new Tik-Tok trend, nor has it supplanted baking bread as the latest pandemic activity. Cartography is big news because it’s once again that time when our state legislature draws the very maps their members depend on to get reelected. State legislatures have almost always abused this process by drawing maps in ways that favor the majority party. This process is called gerrymandering. You probably already know that. You probably also know that gerrymandering became much more extreme after the 2010 census, driven by technology and an utter shamelessness on the part of its practitioners. You probably even voted for Issue 1 several years ago, which was a ballot initiative Ohio voters overwhelmingly supported to do away with the gerrymandering process.

Unfortunately, Issue 1 didn’t work. Republicans dominate every branch of government in Ohio and they just ignored the law. The Ohio Supreme Court narrowly affirmed that the maps drawn by our state legislature and approved by the governor illegally violated the ballot initiative, but don’t expect to see an end to gerrymandering anytime soon. While Issue 1 attempts to lay out rules to force fair maps, we have failed to acknowledge that gerrymandering is merely a symptom of a broken election process.

Elections in American fail to accurately reflect the will of voters. Other symptoms of this failure include the two-party system, political extremism, and polarization. We cannot treat the symptoms and neglect the disease. For the ideals of representative democracy to succeed, we must implement a system that reflects those ideals.

The Origin of Map Disease

The United States House of Representatives was never particularly well designed. The original plan called for one representative for every thirty thousand people. The House of Representatives and the Senate replaced the Congress of the Confederation, which was completely ineffective because it deferred almost all powers to the states. The 3rd United States Congress was the first to utilize this system (a preliminary apportionment laid out by the Constitution covered the first two) and it consisted of 105 members. In the late 1920s membership grew to 435 and Congress finally realized they needed to put an end to this exponential growth. If not for the Reapportionment Act of 1929, we would have 11,082 members in the House of Representatives today.

Although 435 representatives is probably many more than necessary, districts are the real problem with this system. A legislative body consisting of many members has the potential to bring a diversity of viewpoints, but districts with single representatives mean that only the largest faction within a district receive a voice. This is what John Stuart Mill called the “tyranny of the majority,” where 51% of the people can choose to completely ignore the needs and desires of the remaining 49%. Such a system does not achieve the ideal of democracy, where civic participation leads to a system that benefits as many people as possible. The tyranny of the majority can most easily be illustrated by America’s history of systemic racism: slavery, racial terror during reconstruction, and Jim Crow after that.

A similar problem exists with Senators. We elect two Senators per state, but since the same voters elect both Senators, it’s extremely rare for a state to have Senators from different parties. Both the Senate and House of Representatives make the “tyranny of the majority” worse by providing systems that can turn it into a “tyranny of the minority.” For the Senate, this is because low-population states hold a disproportionate amount of power. 1/3 of Americans elect 70% of U.S. Senators. For The House of Representatives, the district system allows for gerrymandering that can allow for minority rule or exaggerate a majority party’s representation. Worst of all, the winner-takes-all nature of these electoral systems has strengthened the two-party system, shutting out third-parties and independents.

Wouldn’t it be great if we could devise a system that would make gerrymandering ineffective? We can. With Issue 1 we tried to solve the gerrymandering problem by applying certain rules to how districts are formed. For example, they had to keep cities, townships, and counties as in-tact as possible. That makes gerrymandering more difficult but not impossible. It also does nothing to solve the “tyranny of the majority” problem.

Using proportional representation, we can ensure that more people within a single district receive representation. This would mean that you receive a ranked-choice ballot, multiple candidates in your district win, but your vote only counts toward one candidate. For example, we could turn our 15 Ohio districts into 5, each with 3 Representatives. The map below shows how these districts might look. 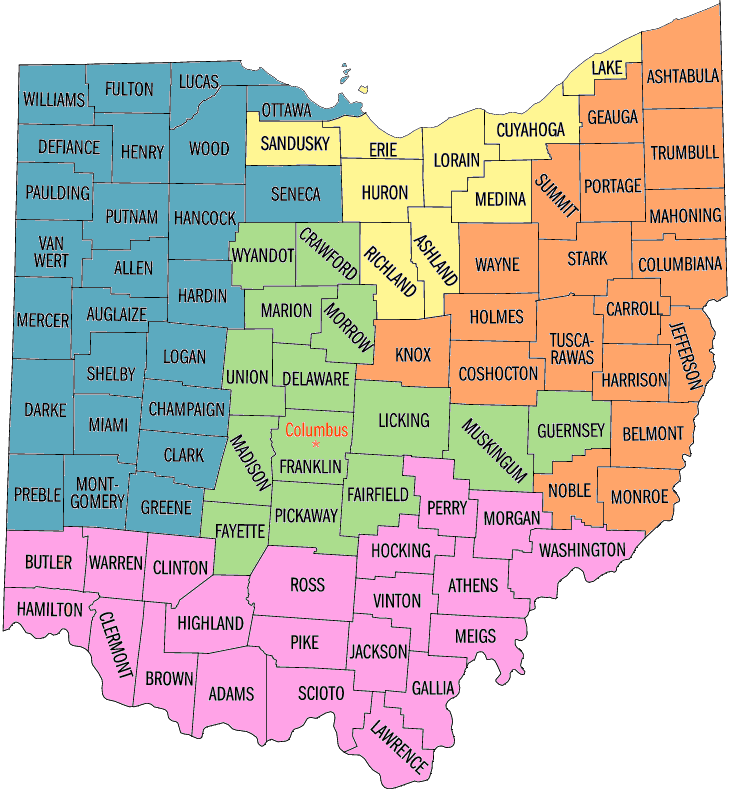 How does this neuter gerrymandering? Each of these districts contains a major Ohio city and a significant rural portion. Under our current two-party system, this means that it’s likely that a Democrat and Republican would be selected from each district. That would place 5 Republicans and 5 Democrats in the House with 5 open seats. If that seems unfair to you because Ohio currently has 12 Republicans and 4 Democrats in the House (we lose a seat in the next election), keep in mind that Ohio voters are currently ~53% Republican and ~45% Democratic.

The 5 remaining seats would go to the next largest voting bloc in each district. For some, that may be a third party or independent. For others, it may be another Republican or Democrat. But for all, it would mean greater representation for the electorate of each district. Electing these third party and independent candidates would be one of the greatest advantages of this system. Many voters latch on to one party or the other because they feel they are voting for the lesser of two evils. By ensuring that 3 candidates win from each district, voters will no longer have to think about their choice in binary terms.

In fact, we could take this system one step further and make 3 districts each with 5 representatives. We could even have an at-large system with no districts. Ohio Attorney General Dave Yost suggested we might have to adopt such a system because the powers that be cannot agree on district maps.

Perhaps the most immediate criticism to this system is that, by making the districts larger, representatives will not be so laser-focused on a small region. This is actually a feature, not a bug. When representatives laser-focus on a specific region, they become controlled by the major donors in that region. They owe favors. They get bills passed that benefit these donors, often in the form of direct cash (grants, contracts, etc.). We know a thing or two about that with Mike Turner, who only comes back to the district to visit donors and tour their factories. The end result of this system is pork. Our congressional leaders are so busy appeasing the big fish in their little ponds they are not worried about the overall economic health of their districts.

A proportional representation system makes donors beholden to a specific voting bloc. This doesn’t wholly do away with the problem of money in politics, but it does make strides to break up the quid-pro-quo pork system.

Another criticism is that this system will make campaigning more expensive for candidates. This is may be true in some cases, but the increase in competition would surely be better for democracy. Currently many Ohio House members have to spend very little on their races because their districts are so gerrymandered that they face no real competition. With so few toss-up districts, incumbents barely have to lift a finger to win. Our current system makes it nearly impossible for new candidates to break through even if they are great fundraisers. This system would invite competition.

What Do You Think?

Let us know what you think in the comments below. The map above was created using U.S. Census data to create 5 districts of approximately the same population while keeping all counties in tact. It didn’t turn out perfect. It’s not ideal how Sandusky County splits Ottawa and Seneca, or how Muskingum and Guernsey sit on a peninsula. Think you could do better? We’d love to see your maps. We’d also love to see some examples of 3 district maps.

We look at the 2021 Dayton “special election” (primary). Who won, who lost, and what the future may hold.

A Look at Dayton’s Upcoming Elections

It’s local election season! We look at candidates for mayor, city commissioner, and clerk of courts. The commissioner race is particularly crowded this year, while the local Democrats have scared off any intra-party challengers to Jeff Mims in the mayoral race. For the clerk position, you have no choice, but it’s important to highlight that fact.