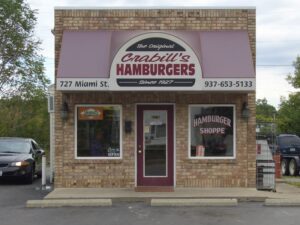 Crabill’s Hamburgers is what you need to know about Urbana.

If you leave Dayton going east on 35 until you get to Xenia and then take 68 north, after you pass through Clark County you will arrive in Champaign County. The county seat, Urbana, lies close to the middle of the county. Small villages populate the outskirts of the county, with only Mechanicsburg, Saint Paris, and North Lewisburg containing more than a stop sign. Urbana is an idyllic town. It has a town square centered around a large statue that begs to be included in a movie. The downtown is full of local businesses and the major streets boast grand houses over a century old. Agriculture is extremely important to the county, but Urbana hosts several branches of international corporations such as Honeywell, Rittal, and Weidmann. The Champaign County fair, while not as physically big as the Ohio state fair, always seems to be a much bigger deal. Urbana is also home to the Johnny Appleseed Museum. Most importantly, Urbana is home to the best hamburger joint in the world, Crabill’s.

Despite replacing draft horses with diesel trucks, Urbana and Champaign County have not changed much since frontiersman Simon Kenton lived in the area during the early 19th century. According to the U.S. Census Bureau, Champaign County’s population of 40,097 is slightly more than double its 1850 population of 19,782. Urbana itself, at 11,793 people as of the 2010 census with an expected drop in 2020, has remained fairly consistent since the mid twentieth century. The city received double digit population growth during the baby boomer decades of the 1950s and 1960s and has retained a population of 10,000 to 12,000 ever since. Champaign County is conservative in just about every way and for Champaign County that’s not a bad thing. Although the county boasts half as many individuals with a bachelor’s degree or higher than Montgomery County, the median household income is nearly $8,000 more per year. 10% and 19.6% of the populations of Champaign County and Urbana live in poverty, respectively, while for Montgomery County and Dayton those numbers lie at 16.9% and 32.1%.

What does Champaign County have going for it that Montgomery County doesn’t? It has the correct local government for its circumstances. The model county government laid out in the Ohio State Constitution calls for a central county seat, townships to provide services for the rural areas, and villages as small population centers. Each of these governing bodies has home-rule and, while the county has some authority in the form of the sheriff and other elected county positions, most decisions are made by the cities, villages, and townships themselves. This works great for a county where twenty minutes of farmland separate the county seat from its only two substantial villages. Like most of Ohio’s counties, Champaign County is administered like a 19th century community because it is still structured like a 19th century community.

This model even works for moderately sized counties when their cities have not outgrown their original structures. Below is a map of Clark County. With a population of 58,877, its county seat Springfield, exceeds that of all of Champaign County. Clark County does not provide the stark statistical contrast to Montgomery County that can be seen with Champaign County, but it does slightly outperform Montgomery in all the previously addressed categories. The important thing to note is the visual layout of the county: a central county seat surrounded by rural townships and small villages on the outskirts of the county. A city-township-village structure works for counties like Clark.

Look at these satellite images of Champaign and Clark Counties. Without a map to guide you, could you outline the approximate borders of the cities and villages? You probably could do it almost perfectly, with the odd exception that in Clark County New Carlisle and Park Layne are both technically New Carlisle. 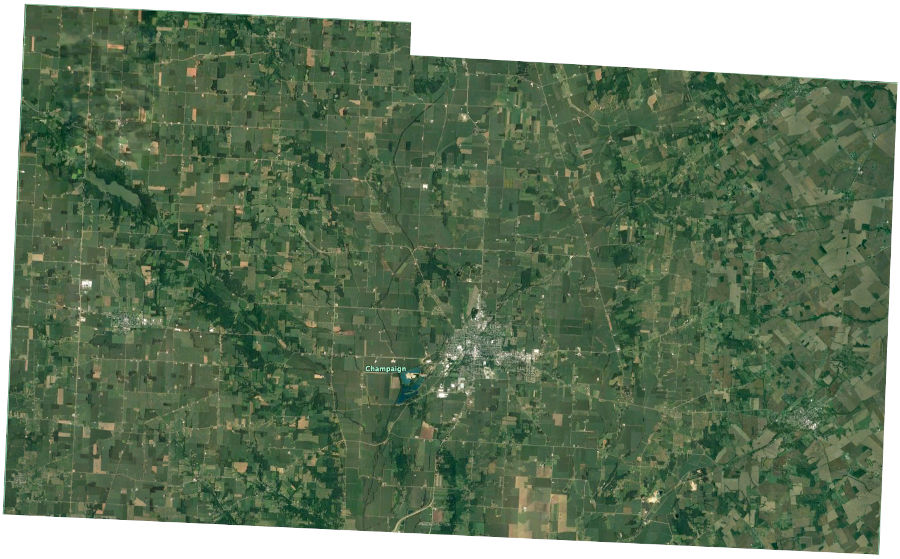 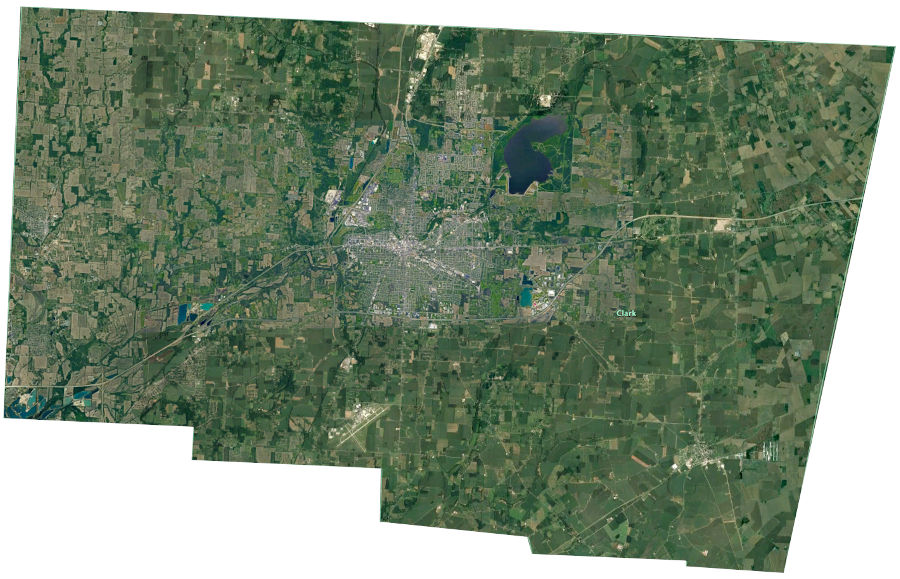 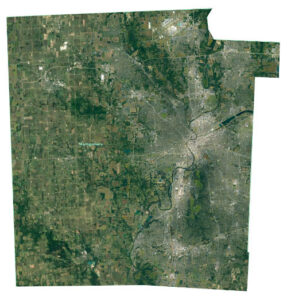 Montgomery County has an urban sprawl to the east that extends into Greene County and rural land with a few villages in the west.

Unless you know the region extremely well, it would be impossible to identify the border between Dayton and Moraine, Moraine and West Carrollton, West Carrollton and Miamisburg. How about Riverside? Can you even find it? And if you didn’t know to look for the big houses, how would you ever distinguish Oakwood? The east side of Montgomery County is a single metropolis but we still use a structure of local government designed back when Ohio was “the west.” Champaign County has four mayors: Urbana, North Lewisburg, Mechanicsburg, and Saint Paris. Montgomery County has twenty one. That means twenty one separate bureaucracies and twenty one different police departments and fire departments and water departments. That’s not even counting the townships. Montgomery County has more townships than Champaign County even though over half the land is covered by municipalities. This means that the greater population densities Montgomery County’s townships require township governments to take on administrative tasks they are not ideally suited for such as policing. Miami Township alone has more people than all of Champaign County. Our traditional form of county government works fine for rural counties that have retained a frontier design. For predominately urban counties it just creates a mess. This is why Article X of the Ohio Constitution provides counties with the option to restructure their local government to better fit local demands. Montgomery County needs to develop a government with a more regional focus if we expect to compete with cities that have already undertaken this modernization, such as Cleveland, Columbus, and Akron.