Note: We apologize for the lack of content recently. We have been quite busy behind the scenes doing research and advocating for public policy. If you would like to receive updates when we publish new content please subscribe at the bottom of the page.

Shared Resource Center (SRC), a government organization that functions to outsource basic school administrative functions, has landed a contract with Dayton Public Schools. On its face, that news is pretty unspectacular. Certainly not newsworthy.

On August 26th, 2021, Tiffany Hiser of Shared Resource Center sent an e-mail thanking Dayton Public School Superintendent Elizabeth Lolli and members of the school board for a meeting on the previous day (08/25/2021):

Later that same day, Dayton School Board President Mohamed Al-Hamdani called for a special School Board meeting to discuss a contract with Shared Resource Center. This was scheduled to take place on 08/31/2021 and had two items on the agenda: an executive session for “Negotiations” and to “Discuss & Review Potential Contract with Shared Resource Center.”

On the date of the meeting, Al-Hamdani begins the meeting by proposing the executive session. An executive session is an exception detailed under §121.22 of Ohio Revised Code that allows bodies that are required to conduct all business and meetings in public to hold private discussions. Specifically, Al-Hamdani provides this boilerplate explanation, reading directly off his laptop:

Board members, pursuant to section 121.22.G.2 of the Ohio Revised Code, I move that this Board go into executive session. This meeting is being held to prepare for conduct and review negotiations with employees regarding their compensations or terms and conditions of their employment.

Al-Hamdani actually referenced the wrong law. ORC §121.22.G.2 pertains to the purchase and sale of property. He meant to reference ORC §121.22.G.4, which states:

Preparing for, conducting, or reviewing negotiations or bargaining sessions with public employees concerning their compensation or other terms and conditions of their employment;

Why do they need to do this executive session at a special meeting that was called specifically to discuss and review a contract with Shared Resource Center? Al-Hamdani explains in another e-mail:

Perhaps the most clear indication that the executive session was used to discuss and review the Shared Resource Center contract was the meeting itself. Despite the agenda clearly calling for a discussion and review of the contract, and despite a complete lack of public records demonstrating that the Board did anything more than receive a copy of the contract to their e-mail addresses, when the executive session ends Al-Hamdani immediately calls for a vote on the contract.

Did the Dayton Public School Board agree to this contract without any deliberation? Was the contract so urgent that they had to forego a public meeting where citizens would be present? It is hard to conclude anything but the members of the School Board wanted this contract passed quickly and they wanted it passed without any public scrutiny. There’s one major problem with that: the law. ORC §121.22.H:

If you remember the initial e-mail from Tiffany Hisner on 08/26/2021, she thanked Superintendent Lolli and the board for meeting with her the previous day. According to the Dayton Public Schools agenda, no meeting was scheduled for 08/25/2021. Whenever deliberations occurred—whether it was in the executive session, the meeting with Hisner, or some other time—they were not open to the public. The contract with Shared Resource Center is legally invalid.

What is Shared Resource Center?

Shared Resource Center is an arm of the local education agency, Montgomery County Educational Service Center (MCESC). According to Ohio Revised Code, Educational Service Centers (ESC) are technically consortia and they are technically school districts. This means that they are “special purpose governments” unbound by traditional boundaries, but they only exist if school districts purchase services from them. If they cease to receive clients (school districts), they are dissolved and cease to exist. It is overseen by a three person elected board that Dayton residents can’t run for. In fact, very few people in the various jurisdictions overseen by MCESC can run for the board, meaning that most citizens have no control over how this money is spent. ESCs have generally become a place to park retired superintendents.

Educational Service Centers were originally “County School Districts” and actually functioned similar to how we think of school districts today.

The idea of service consolidation is appealing and broadly aligns with the goals of Reconstructing Dayton, but the Educational Service Center model has some serious flaws. Mainly, it is an attempt to consolidate services without consolidating school districts. When running for governor in 2010, John Kasich toyed with the idea of school district consolidation, but quickly backed off when the idea faced immediate backlash. At issue is that middle class and wealthy Ohioans like our unconstitutional school system because it provides disproportionate benefits to middle class and wealthy children. Our current system allows wealthy school districts to carve out a high-revenue tax base and deny open enrollment to low-income students. A more logical solution would be to get rid of school districts altogether and make the county responsible for a county-wide school system, but this solution faces stout opposition from suburbanites who want to provide their children with disproportionate advantages.

Dayton Public Schools Treasurer Hiwot Abraha was initially confused by the initial call for a special meeting because it was titled, “SPECIAL MEETING —PROCESS REVIEW CONTRACT FOR TREASURER’S OFFICE.” Her response indicates that the Treasurer did not seek or require any contracts for review:

When the SRC materials were sent to Abraha and the purpose of the meeting explained to her, she pushed back against an unnecessary expenditure. According to Dayton Public Schools Treasurer, Shared Resource Center was offering a solution in search of a problem. 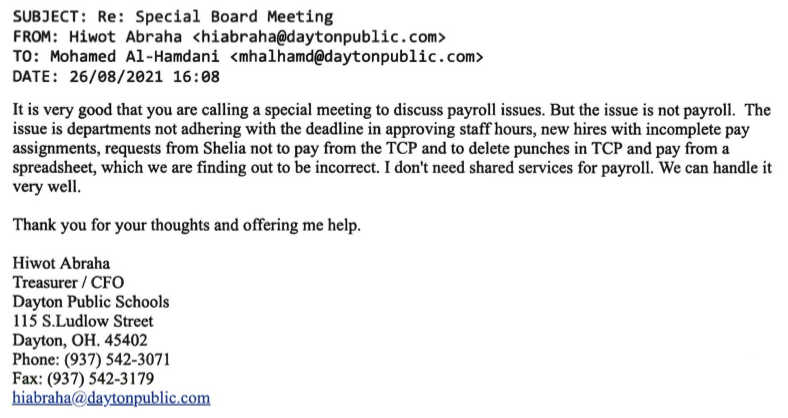 Abraha appears to give Al-Hamdani the benefit of the doubt, assuming that he’s actually trying to fix a problem and has just misunderstood the Treasurer’s needs. Al-Hamdani then responds to the other board members—not the treasurer—assuring them that the treasurer is the one who must be confused. Note how he accuses her of feeling “threatened” by the contract, which her previous e-mails do not seem to actually suggest.

It’s also notable that the contract is just for a review, meaning that it’s a mere precursor to larger contracts down the road. Dayton Public Schools is paying Shared Resource Center to develop a proposal.

The biggest mystery of this whole affair is the reason for it. Al-Hamdani appears intent on pushing a contract through and avoiding any public oversight in the process. Shared Resource Center is nominally a public entity but it functions like a for-profit company and depends on obtaining these types of contracts to continue its existence. It should also be noted that Sam Braun, husband of Dayton Mayor Nan Whaley, works for Shared Resource Center. Al-Hamdani has demonstrated a fondness for opaque and convoluted attempts to correct the many problems with Dayton Public Schools, but his disregard of his Treasurer’s concerns suggests that he didn’t consider whether Shared Resource Center could actually benefit the district.

Reconstructing Dayton reached out to Al-Hamdani and he insisted that any items discussed in the executive session were for the stated reasons and that he could not elaborate beyond those stated reasons. He also insisted that board members had the chance to ask questions or discuss the contract before the vote and nobody chose to do so. Al-Hamdani declined to explain why the reservations of Abraha were not addressed, saying the contract was brought forward because of concerns regarding payroll. According to Al-Hamdani, a review meeting tomorrow (10/12/2021) will feature the findings from the Shared Resource Center review. The School Board agenda does have SRC Executive Director Tiffany Hiser scheduled to speak. As a review session, this meeting will not be open to the public but it will be recorded and posted to the Dayton Public Schools YouTube channel. Al-Hamdani assured me that these findings will be presented at a public meeting on 10/19/2021 and any future contracts with SRC will be contingent upon the results of their findings. We encourage all citizens who pay taxes within the Dayton Public School District to attend the meeting on Tuesday, October 19th, and ask questions.

Regardless of the openness of future contracts with SRC, this initial contract was appears to have been discussed behind closed doors. If it wasn’t, then the Dayton Public School Board signed a $15,000 contract without even discussing it. You decide which is worse.

[note: On some systems the PDF does not appear to be embedding correctly. If you experience this issue click the download button on top of the PDF or by clicking here and you should be able to view it. We will work on correcting this issue.]