Ohio Elections Subvert the Will of the People

On Tuesday, Ohio held a couple of special elections that have attracted quite a bit of national interest. Progressive heartthrob Nina Turner lost to Shontel Brown in a primary for the 11th Congressional District and Trump-backed conservative Mike Carey emerged victorious from a crowded field in the 15th Congressional District. The national narrative regarding these races revolves around the establishment v. outsider dynamic present in both contests. Others look at Donald Trump and Jim Clyburn as supposed “kingmakers. These stories—along with the out of state politicians who attempted to exert their influence—overlook the local issues that are most pertinent to our elections. National journalists and politicians are so eager to contort our local political contests into a scene for their epic story of a battle between the Ds and the Rs that they cannot see the races from any other lens. There are real lessons to be learned from these campaigns. There are stories pertinent to our political systems both locally and nationally. But that’s not what anyone is talking about because these lessons and stories don’t fit within the established donkey v. elephant narrative.

Fortunately, that’s what we do.

If having an election in August seems odd that’s because it is. Not only are many Ohioans out of the state on vacation, but only those who closely follow politics were even aware that an election was going on. When more politicos from out of state are paying attention to a political race than voting residents of the district, it’s hard to argue that the end result truly represents the will of the people. 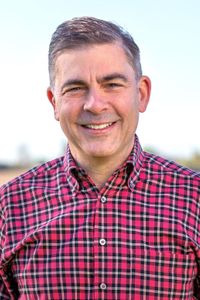 Cuyahoga county, the primary home to the 11th Congressional District, notched a 16.88% turnout. That was considered much higher than expected. Turnout among all statewide primaries totaled 13.97%.

Despite all the money flooding into these races, much of it from out of state, actual Ohio voters in these districts hardly paid attention. There is a severe lack of awareness among the electorate regarding special elections, so all of that money is spent to influence a very small number of individuals.

To make matters worse, multiple boards of elections from the counties in these congressional districts must organize these low turnout elections all at the cost of taxpayers.

Problem #2: Plurality Voting Does Not Represent the People

Shontel Brown managed to eclipse 50% of the vote with 50.4%, which means that 49.6% of the voters in her district wanted someone else. Mike Carey won the 15th Congressional District with 37% of the vote, which was more than double second place Jeff LaRe’s 13%. Under our current system—plurality voting—they are considered the fair winners because they received more votes than anyone else. Take a look at the Republican primary in the 15th: 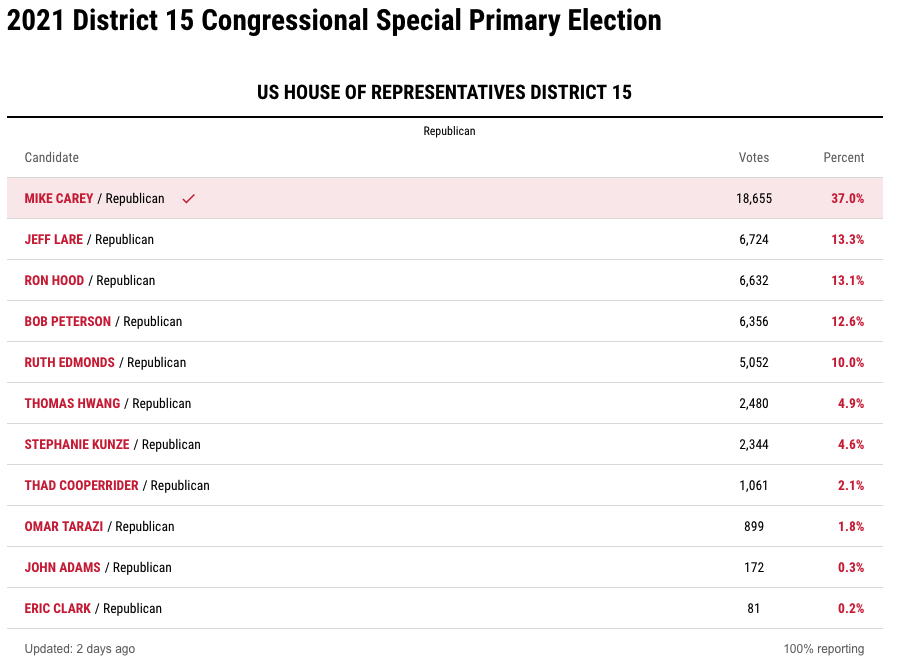 What would happen if we implemented a basic ranked-choice voting system where an instant runoff would trigger and continue until a candidate wins over 50% of the vote? Carey positioned himself as the “Trump candidate” as a way to distinguish himself and that strategy certainly worked considering that his opponents were more similar to each other than they were to him. But think about this: if all of the other Republicans except LaRe had dropped out, would Carey have won a head to head election against him? Perhaps. The numbers certainly suggest that, even with an instant-runoff election, Carey would still come up on top. It’s rare for someone with such a commanding lead in the initial round to end up losing. But unfortunately we won’t have the opportunity to know for sure. Mike Carey, despite garnering less than a majority of support in just the primary for his own party, will probably be headed to Congress in the near future.

Shontel Brown, having earned more than 50% of the vote, would have secured her position even in an instant runoff election. 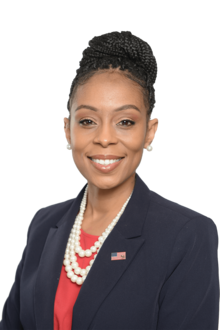 Shontel Brown took some flack for remaining as the Cuyahoga County Democratic Party chair and rightfully so. It’s hard to look at the race as fair when all the local Dems likely felt pressure to support Brown. The intermingling between politicians, party leadership, Boards of Elections, and lobbyists creates toxic political cabals that are not held accountable.

On the flip side, Mike Carey won despite the efforts of the Ohio Republican Party to push for anyone else. Sixteen Ohio House of Representatives members endorsed LaRe and he also received an endorsement from Steve Stivers, who held the congressional seat for the 15th until he recently resigned for a cushy job as CEO of the Ohio Chamber of Commerce. This might indicate that party power isn’t absolute, but this situation is the exception that proves the rule. Ron Hood took a decent chunk of the vote as a more libertarian candidate and the rest of the Republican vote was split between a long list of candidates with various endorsements. Stephanie Kunze received the endorsement of the Franklin County Republican Party and still only hauled in 4.6% of the vote. Bob Peterson also received several endorsements from prominent Ohio Republicans and came away with 12.6% of the vote.

A crowded primary can overcome the will of the party, but this can come at the cost over overcoming the will of the people. A United States Congressional District has approximately 710,000 people. With 18,655 votes, Mike Carey is likely going to Congress. As a reward, the Ohio Republican Party will throw their weight behind him in future elections. Even with congressional realignment, his district will remain gerrymandered in favor of Republicans and he won’t face another competitive race. Even when the party loses, they win.

The various problems with our electoral system cannot be solved by a single solution, but the first step to correcting the problems listed above is proportional representation. This means not only do we adopt ranked-choice voting, but we get rid of partisan primaries. We increase the size of our congressional districts and elect the top three ranking candidates from each district. That would mean that, instead of this map of sixteen congressional districts: 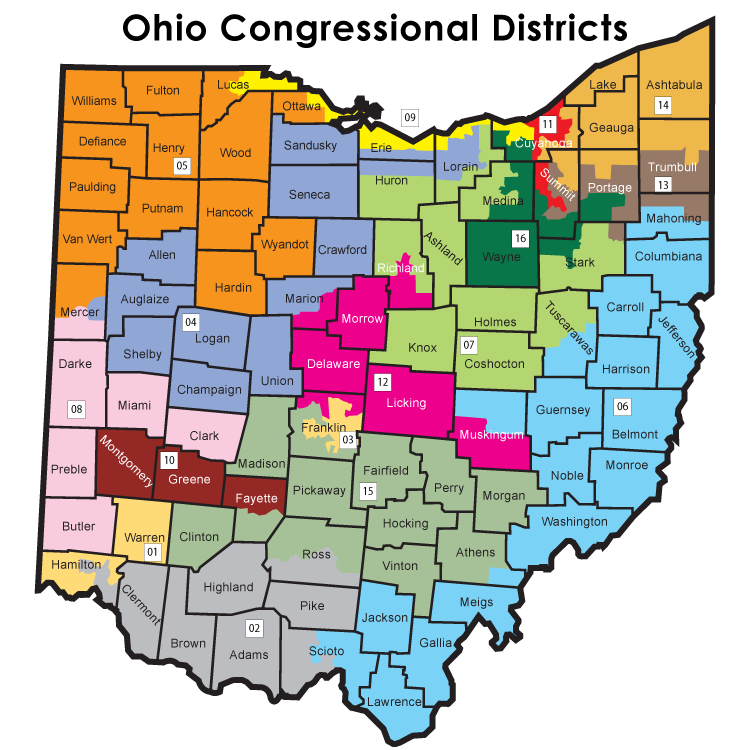 We would have five districts with three candidates each (the math works out because Ohio is losing a district due to the 2020 census). Using such a system, it’s entirely possible that Shontel Brown and Mike Carey would still end up in Congress. But it’s also possible that a system that more accurately reflects the will of the people would have sent others to Capitol Hill. Unfortunately, we just won’t know until we implement electoral reforms that are designed to represent the will of the people rather than subvert it. We need to reform campaign finance laws and we need to reform our crooked Board of Elections system and any other laws that explicitly grant power to certain political parties. We need to be able to hold politicians accountable when they engage in corruption schemes. We need sunshine laws that actually let sunshine in. But none of those things can happen until we can cast a vote and be confident that it actually counts for something.