Should Government Employees be Involved in Politics?

Between the national news of angry mobs in D.C. and the local news that Nan Whaley will not run for reelection, an interesting piece in the Dayton Daily News may have escaped your attention. Mohamed Al-Hamdani, Dayton Public School Board President and member of the Dayton charter review committee, has raised concerns about the Constitutionality of Section 105 of the Dayton City Charter.

No person in the classified service or seeking admission thereto, shall be appointed, reduced or removed, or in any way favored or discriminated against because of political opinions or affiliations, or because of race, color or religious belief. No officer or employee of the city shall directly or indirectly solicit or receive or be in any manner concerned in soliciting or receiving any assessment, subscription or contribution for any political party or political purpose whatever. No person holding a position in the classified service shall take any part in political management or affairs or in political campaigns further than to cast his vote or to express privately his opinions.

Al-Hamdani has identified the part where public employees are forbidden from participating in political activities as problematic. He asserts that it conflicts with those individuals’ First Amendment rights and that, by allowing the provision to persist, the city places itself in a liable position. “You guys are pretty open to a First Amendment lawsuit,” he bluntly states.

Would the city actually lose a First Amendment lawsuit if an employee were to sue because of these restrictions? Probably not. Supreme Court precedent has protected similar restrictions so, in order for Dayton to lose such a case, it would probably have to make its way to the Supreme Court to set a new precedent.

The History of Restricting the Speech of Government Employees

The following section will primarily rely on a single source, The Middle Tennessee State University First Amendment Encyclopedia. It may not be considered good form to lean so heavily on one source, but it’s well-suited for our purposes. The site simplifies legal history and concepts for the layperson and that’s our goal. This ain’t a law journal article.

Since Earl Warren became Supreme Court Chief Justice in 1954, the United States has vastly expanded First Amendment protections. However, the courts have maintained that certain restrictions may be applied to government employees. Classified information presents a clear example of this. As we know from contemporary examples such as the cases of Chelsea Manning and Edward Snowden, government employees or contractors can be restricted from publishing certain materials as a condition of their employment.

Restrictions on political activity present a more difficult problem but follow a similar logic. In 1882, the Supreme Court decided in Ex parte Curtis that the government was allowed to prohibit government officials from receiving money from other government employees for political purposes. That is one part of Dayton Charter §105. It is also similar to the Hatch Act of 1939, which limited federal employees’ abilities to work on political campaigns or raise money for candidates. In 1940 the Hatch Act was expanded to include local government employees who receive federal funding. In the Miami Valley, similar restrictions are placed on “classified employees,” which have been frequently violated by both parties. In 1973 the Supreme Court ruled that a statute in Oklahoma restricting the political activities of state employees was constitutional because “the statute . . . [sought] to regulate political activity in an even-handed and neutral manner.”

The Hatch Act was curtailed in 1993 but this was through legislative amendments rather than Constitutional challenges in court. The act repeatedly withstood Constitutional challenges before the 1993 amendments. In United States Civil Service Commission v. National Association of Letter Carriers, the majority decision stated that “partisan political activities by federal employees must be limited if the Government is to operate effectively and fairly.” Precedent supports the legality of Dayton’s §105, but that does not mean that a suit would definitely fail. Precedent does change from time to time, and none of the previously mentioned cases were decided by any of the current Supreme Court Justices. Recent cases such as Citizens United v. Federal Elections Commission demonstrate that the high court may take a more expansive view of the First Amendment. It’s also notable that all of the previously cited cases were split-decisions; considering previous courts have not unanimously upheld limits on public employee freedoms, a change of precedent is clearly possible. But to get a case before the Supreme Court is a rather tall order. Al-Hamdani is a bit overconfident when he claims that, “if somebody sues [the city], [it’s] going to lose this lawsuit.”

The issue at hand presents an interesting paradox. If government employees are restricted from politicking, then their freedoms have been curtailed. On the flip side, if they are given the freedom to engage in political activity, then they become vulnerable to undue influence by their superiors who are often elected partisans. Allowing politics and government administration to intermingle allows for patronage systems—where politicians ensure that all political jobs are held by political loyalists—to take hold. To determine whether laws such as §105 of the Dayton City Charter are desirable, we should weigh the harm caused by limiting government employee freedom against the harm caused by a patronage system that demands government employees act with fidelity toward a particular political party. 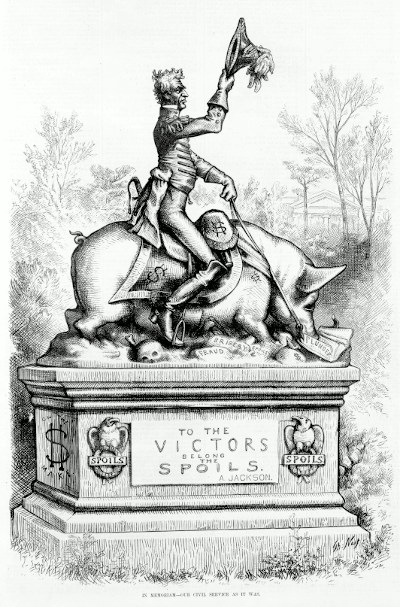 Government patronage jobs have a long history in the United States. Upon his election, Andrew Jackson immediately began firing officials to appoint political allies he had promised jobs to in exchange for support during his campaign. This was called the “spoils system” because “to the victors go the spoils.” The spoils system lasted until 1883 when the Pendleton Act officially replaced it with a merit system. However, this only applied to federal employees. Local governments, especially cities, often have political “machines” that combine the dominant political party with the administrative functions of local government. In Ohio this system is often seen at the county level, with a heavy intermingling of politics and government employees, even when the law prohibits it. If local governments want to avoid patronage systems, they must enact laws such as §105 to prohibit them, which is complicated by the fact that partisan prosecutors decide whether to enforce the law.

Laws proscribing patronage clearly restrict the First Amendment rights of government employees, but one can also look at the First Amendment implications of patronage from the opposite perspective. By requiring partisan fidelity on the part of government employees, the employer violates the employee’s right to express their true political beliefs. In Elrod v. Burns, the Supreme Court found that a sheriff could not make employment conditional upon partisan affiliation. Similarly, in Rutan v. Republican Party of Illinois, the court found that the state could not require all local employees to be approved by the governor.

Changing the Dayton of City Charter to allow for greater political participation may expand the freedoms of government employees, but it would come at the risk of opening the doors to patronage. In theory, the precedents set by Elrod and Rutan ought to protect employees from the greatest abuses of a patronage system, but this would require employees to demonstrate in court that their individual rights had been infringed. In both of those cases, the enforcement of a patronage system for political means was explicit and clear. What becomes more problematic is when a character like County Prosecutor Mat Heck provides extravagant bonuses with the expectation that some of that money will make its way back to the local Democratic party. He doesn’t have to be explicit about it when everyone figures out that the party loyal receive bigger bonuses and better promotions. Or when the patronage system is used to create solidarity within local government to cover up misdeeds. Allowing the patronage system to exist allows incumbents to use government resources—most importantly, labor—to maintain their political power.

If government employees are forbidden from working on political campaigns, then they have lost their voice to advocate for political changes they believe in. But this restriction also acts as a shield. Without it, they can be forced to advocate for political changes they genuinely don’t believe in. When given the choice between forcing silence and forcing speech, forcing speech appears to be the greater evil. Forcing silence allows public employees to go about their jobs without a fear of repercussions. Forcing speech can create a culture of fear, loyalty tests, and foster corruption by pushing out non-partisans.

Al-Hamdani’s primary complaint is that §105 prohibits local government employees from participating in national or state elections. Amending §105 to allow this type of political participation may be a viable way to resolve this problem without opening the doors to patronage. By arguing that the law is unconstitutional, Al-Hamdani suggests that striking the law completely is the only Constitutional remedy. It is not.

Why would Al-Hamdani argue for a patronage system? As a lawyer, he should know better. It’s difficult not to take a cynical look at Al-Hamdani’s deep involvement with the local Democratic party and conclude that he sees benefits in paving the way for a strengthened political machine in Dayton.